Next weekend is the classic Oakville event you and your stomach don’t want to miss. Oakville family Ribfest was voted as the best tourist attraction in the Oakville Beaver’s Reader’s Choice Awards. The 5th annual Ribfest is taking place at Sheridan College from June 24-26. The hours are:   Friday: 4pm-11pm Saturday: 11am-11pm Sunday: 11am-7pm   Parking at Sheridan Colle...Read More

The projected population increase of the Greater Toronto and Hamilton Area within the next 20 years is 3.5 million people. That’s more than the current population of Toronto. What does 3.5 million more people look like? And how will real estate be affected?   It means and equal amount of growth in schools, hospitals, and transit. But there is worry that governments are being more reacti...Read More

Sometimes trends are just trends and don’t last forever. But some trends are different and eventually become a norm. So keep these in mind for your next kitchen renovation. Because they might be the next norm for kitchens.   Kitchen renovations are always a big investment for real estate. Its because kitchens are a main selling point of a home and are increasingly a central hang...Read More

Its not even surprising that May has set another record for real estate sales. 12,870 homes were sold in the month, which is an increase of 10.6% from last year. This is despite a decreasing number of listings which have dropped by 6%.   Meanwhile the Chief Economist at Dominion Lending Centres recently expressed worry about increasing home prices because “these things generally don&rsq...Read More 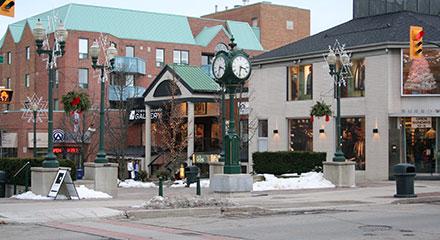 Oakville is up three places since last year for the third overall best community to live. A survey done by MoneySense looked at 219 cities and communities across Canada to determine where the most ideal place to live is.   A number of factors were used to determine quality of living. Some included wealth/income, crime rate, amenities, weather, and housing affordability. Housing affordability?...Read More

Burlington’s downtown will be transformed into a hub of music and the arts from June 11th to 19th. The nine day music festival has been growing in popularity over the 35 years of its existence. It is Canada’s largest free music festival.   Over 100 artists are performing in 10 different stage and venue areas. The shows are a mix of ticketed and free. June 11th – 15th are tic...Read More

The Organization for Economic Cooperation and Development is now added to the growing list of academics, bankers, economists, and think tanks who are calling attention to Canada’s housing market.   The OECD is an organization that is typically supportive of free markets and free trade. For this organization to call for government intervention into markets speaks volumes about Canada&rsq...Read More

This year’s theme is “Health Oceans, Healthy Planet”. The earth is more ocean than land. Yet most people don’t think much about the ocean. Oceans impact us and our decisions also impact the ocean. Even Oakville, which seems far from the ocean, is connected through rivers.   Oakville has two main rivers – Bronte Creek, and 16 Mile Creek. These rivers are important...Read More

For many Millenials, vacation homes are the only affordable way of getting their feet into the real estate market. Affording a home in the GTA on a single salary income is pretty much out of the question. So a single millennial who doesn’t want to buy a condo is left with few options. Look north.   It might not be the worst idea. Cottage owners could rent out the property over the seaso...Read More

Sometimes its nice to dream. But even if I had all the money in the world, I probably wouldn’t want to live in a $17.9 million dollar house. Especially the one currently for sale in Oakville. How bout you?   It’s 15,000 square feet of marble, hardwood, Persian rugs, and granite countertops. There are 5 bedrooms each with its own wing of the house. And 8 bathrooms. Yes, 8 of them, ...Read More